Work is underway on the modern, $1.5B New Terminal at Kansas City International Airport. Dubbed Build KCI, the project will replace the aging three-terminal complex and will be built on the site of Terminal A, now demolished. The construction of the New Terminal and garage necessitates some shifts in traffic patterns to and from terminals B and C. Work is being done in phases to establish these changes, and Phase 2 is set to begin. Airport users are urged to allow extra time and be mindful to changing traffic patterns.

Effective 11 pm Wednesday, September 18 traffic between terminals B and C will be restricted to one lane and the “Return to Terminals” loop road off International Circle by the FAA air traffic control tower will be permanently closed. Return-to-terminals vehicular traffic will be routed outbound on Cookingham Drive (main airport freeway) to Paris Street, left across the bridge and left back toward the terminals. Existing traffic signals will remain in operation so nonstop traffic flow will no longer be possible back to the terminals. Alternatively, airport users may proceed outbound to Bern Street to return to the terminals. 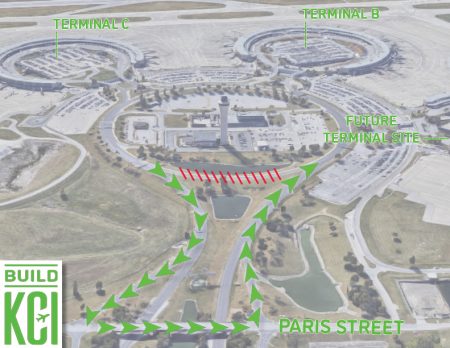 Customers awaiting travelers are reminded that they may park in the Cell Phone Lot in the center of the terminal complex by the FAA tower. They may also park in the Economy Parking Lots free for up to one hour.

The first significant change occurred August 12, where entrance and exit bridges of terminals B and C were reduced from two lanes to one lane. This activity will shift to the other bridge lanes, still reducing traffic to one lane in and out of the terminals. All lanes of traffic inside the terminal circles remain open.

This initial work is toward eventually establishing two roundabouts for access into and out of terminals B and C. The roundabouts are slated to open in mid-2020. The New Terminal and garage will extend from the former Terminal A site to the KCI Airport Police building near the air traffic control tower. Construction will eventually require closure of the western side (front end) of International Circle, which links the terminals. In mid-2020 inbound Cookingham Drive traffic will be diverted across the median into the eastern side (far end) of International Circle. Two-way traffic will be established on International Circle to Terminal C then to Terminal B. Roundabouts will feed traffic into and out of the two terminals. Full-depth repairs on the lanes of eastern International Circle occurred in May to improve the surface prior to directional changes.

To create the roundabouts and other related infrastructure, a series of construction phases will occur. The one-lane terminal entrances and exits will remain in place through the duration of the phases and additional lane closures and traffic shifts will occur, so airport users should allow extra time for the next year.

Ground breaking on Build KCI was March 25. Much work has occurred with the installation of fencing, clearing and demolition of Terminal A and its garage, closure and asphalt removal of Circle Lots E-1 and E-2.

Build KCI
At just over one million square feet, the Kansas City International Airport New Terminal, Build KCI, is the largest single infrastructure project in the City’s history. It will have a lasting economic impact on the region in the form of new jobs, opportunities for local and small businesses, and a first-class traveler experience for airport users. The facility will open with 39 gates and the ability to expand up to 50 gates in the future. The New Terminal will also include a 6,300 space parking structure, which will be constructed adjacent to the terminal building, a central utility plant, and landside and airside improvements.

Led by the Kansas City Aviation Department, Edgemoor Infrastructure & Real Estate and Clark | Weitz | Clarkson, the Build KCI project is expected to generate up to 5,000 construction-related jobs. More than sixty local partners are already at work on the project, including more than 40 minority- and women-owned businesses. The project will be funded using 100 percent tax-exempt debt – the most cost efficient approach for the project.