Travelers and visitors driving to the terminals at Kansas City International Airport will soon use a new roadway system featuring roundabouts.

To make way for construction of the $1.5B New Terminal, major vehicular traffic pattern changes will be effective April 28, 2020. Currently, all vehicles travel in the same direction in a continuous loop around and through the terminals on International Circle. Construction necessitates closing International Circle in front of the former Terminal A site. “Inbound” traffic will utilize a new roadway across the Cookingham Drive (main airport freeway) median to establish divided, two-way traffic into and out of the terminals. Vehicles will enter and exit each terminal using roundabouts.

With this redirection, motorists will encounter the Terminal C roundabout first, and then the Terminal B roundabout. Vehicles in the roundabouts have the right of way. Through traffic and vehicles exiting the terminal must yield to traffic in the roundabouts. As before, signage directs motorists to their airline in terminals B or C. Motorists are urged to drive slowly, be alert, read signs, and use patience and courtesy.

Customers awaiting travelers are reminded that they may park in the relocated Cell Phone Lot on Brasilia Avenue near the Marriott Hotel.

The two-way traffic with roundabouts will remain in place until the New Terminal is completed in spring 2023.

At just over one million square feet, the Kansas City International Airport New Terminal, Build KCI, is the largest single infrastructure project in the City’s history. It will have a lasting economic impact on the region in the form of new jobs, opportunities for local and small businesses, and a first-class traveler experience for airport users. With ground breaking on March 25, 2019, the facility is slated to open spring 2023 with 39 gates and the ability to expand up to 50 gates in the future. The New Terminal will also include a 6,100 space parking structure, which will be constructed adjacent to the terminal building, a central utility plant, and landside and airside improvements.

Led by the Kansas City Aviation Department, Edgemoor Infrastructure & Real Estate and Clark | Weitz | Clarkson, the Build KCI project is expected to generate up to 5,000 construction-related jobs. More than 140 Kansas City area-based partners are already at work on the project, including more than 80 minority- and women-owned businesses. The project will be funded using 100 percent tax-exempt debt – the most cost-efficient approach for the project.

When complete, the new facility will replace the airport’s dated and aging terminals, which opened in 1972. The New Terminal is being built in the footprint of the airport’s former Terminal A, which no longer exists. 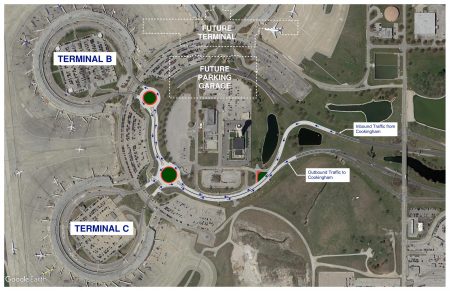