As the last flight of the day pulled into the gate recently and passengers collected their luggage, members of the Clark | Weitz | Clarkson (CWC) team prepared to start their workday. Beginning their shift at 10:00 p.m., crews worked through the cold, dark winter months to complete the highly-technical process of relocating aviation fuel lines on the Kansas City International Airport (KCI) New Terminal Project.

The fuel lines serving active Terminals B and C ran directly under the footprint of the New Terminal headhouse, the structure that will house ticketing and check-in counters, baggage service, and security. To proceed with construction of the headhouse, these lines had to be deactivated, isolated, and relocated – all without interrupting passenger travel.

Planning the approach to this construction challenge required a clear understanding of airline operations and a coordinated effort between CWC, trade contractors U.S. Engineering and Alexander Mechanical, airline representatives, airport fuel line operators, and the design team. To reduce the risk of impact to travelers, the team determined that performing the work over a series of overnight work windows would be the best approach.

With a process called hot tapping, overnight crews isolated sections of pipeline for relocation without requiring the entire fuel system to be shut down and without losing product. Existing active lines were excavated and depressurized, allowing crews to drill into the pipes to install stopples, large expandable plugs used to cut off the flow of fuel to precisely isolate sections of the line. With stopples in place, fuel could be drained from the isolated section, allowing crews to safely begin cutting and installing new lines.

Crews worked through the hot tapping and stoppling process in 30-minute increments each night. At the end of each 30-minute increment, completed work would be carefully evaluated before moving on to the next step. The incremental segments enabled the team to look for leaks and identify other concerns that could be immediately addressed without risk to airport operations. Each night’s work had to be completed by 3:30 a.m. to allow airport fuel operators time to re-pressurize lines and begin fueling planes for the first departures of the day.

The aviation fuel line relocation process was completed in late January 2020 without delays or impacts to airline operations, despite crews facing winter wind chills as low as -3 during overnight construction.

Follow the progress of the New Terminal at BuildKCI.com. 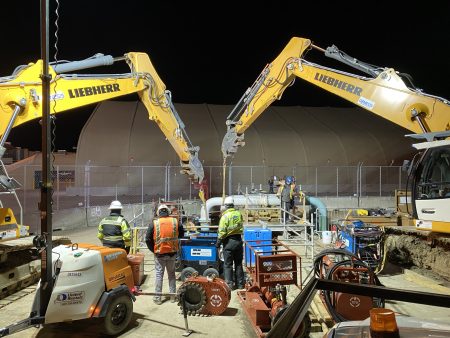 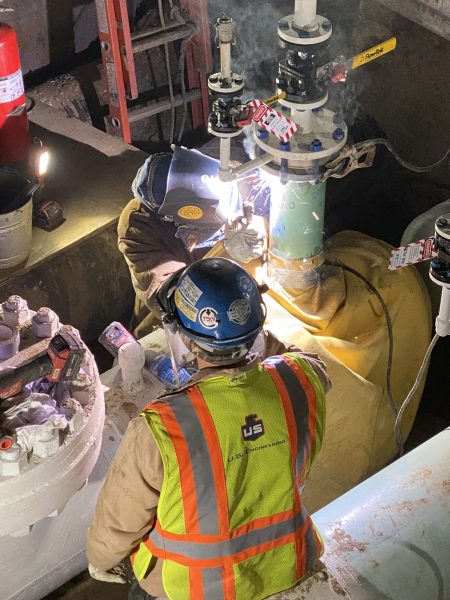